Just after New Year’s, I finished Melanie Shankle’s The Church of Small Things, in hopes of fulfilling a 2020 goal of reading books recommended by blogging friends. This one was recommended by Deb Nance on her blog, Readerbuzz, as a book to improve one’s mood and uplift their spirits…and it did just that!

The cover of the audiobook along was a delight –all hot pink and gold scroll and included everything from an elephant to a wee mouse. Pioneer Woman, Ree Drummond wrote about her delight with the book in the foreword, and describes it as “dry but warm humor.” Church deals with “the small moments, the small memories, the small achievements of the author’s life, and in turn’s, helps us appreciate our own.

Although “we live in a culture that celebrates the BIG accomplishments,” the author invites us to examine the “smallest, most ordinary acts of daily faithfulness.” For…

Today’s Tuesday Teaser is from City of Girls. 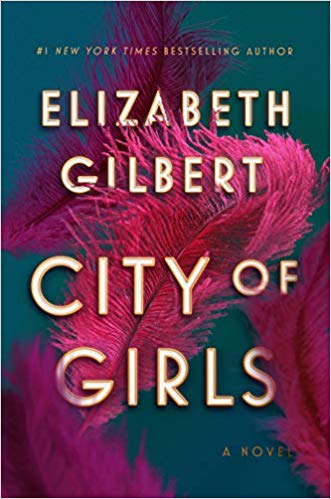 Elizabeth Gilbert has been known as a writer of non-fiction for some time, but this novel she has written is one I am really enjoying. I am choosing to copy some sentences from the part I am currently reading on page 55. Vivian, a Vassar graduate without “prospects,” is brand new to New York and to the Lily Playhouse, a small theater that provided rooms on the upper floors for struggling actors and models run by her eccentric Aunt Peg.  Celia is the show-stopping chorus girl, jaded and gorgeous, whom Vivian has never seen the likes of and greatly admires. Vivian speaks:

“Well, then, I guess I had a roommate now. (That was fine with me, though. I was just honored that she’d chosen me.) I wanted this strange, exotic moment to last as long as possible, so I dared to make…

Sunday Stats is intended to give statistics (often straight out of the Houston Chronicle, Sunday edition) that made me stop and think that I wish to share with readers of this blog.

Here are some interesting stats on Hispanics in Texas and the upcoming election:

“…2020 will mark the first time in 200 years that Latinos return to their role as the largest population of The Lone Star State, a role they held transforming the landscape and history itself, from 1720-1820.”

Interestingly enough, “In this year’s elections and beyond, Latinos will, with their actions or inactions, determine the fate of the second-most populous state in the American democracy. Latinos will determine the outcome, too, for the world’s 10th largest economy.”

Politicians who are savvy will court the Latino vote, and Latinos who are smart will make their votes count in national, state, and local elections.

In 2018 and 2019, I read many books about bookstores, libraries, and books in general.  I enjoyed this so much I am going to continue in 2020 to read “books about books.” One of these I have read since New Year’s Day is Goodnight June by Sarah Rio. Yes, it is based on the children’s classic, Goodnight Moon by Margaret Wise Brown. This novel is based on Jio’s “take” on how the children’s classic may have come to be. The protagonist, June Anderson, librarian, inherits her Great Aunt Ruby’s bookstore which specializes in children’s books. June discovers letters written by her Aunt Ruby to Margaret Wise Brown written in the 40s that are the key to family secrets and will unlock a change in June’s character that will keep the reader cheering for the altruistic librarian. A touch of romance rounds out this author’s engaging tale and provides a “darned…

Yes, the title sounds like an oxymoron, but it is really more of an exercise in finishing sentences. The subtitle is, “Believing in God But Living as if He Doesn’t Exist.” This “life- changing read” includes chapter  titles like:

When You Believe in God, but…

…still worry all the time.

…pursue happiness at any cost.

…not in His church.

This is a convicting read from a self-proclaimed recovering Christian atheist. The book attempts to help the reader move “toward an authentic God-honoring life.” Its relevance to current times and society makes it a very useful read to those hoping to grow their Christian walk.

From Saturday, January 11th through Saturday, January 18th, I’m posting a series, “Countdown to First Classes.” Each day I will report on what I did (or plan to do) to get ready for the Spring semester which begins, Tuesday January 21st. I am looking forward to the coming semester and seeing the new “crop” of writers I will have to work with.  I’ve roughed out my syllabi (two classes of Advanced Writing)  and thought about changes to make and things I will have to change in order to keep up with teaching two sections, something  haven’t attempted since 2014. I have a vague idea of what I want the students to do on the first day, but will use you, dear readers, as a sounding board for what works and what doesn’t, what sounds like fun, and what sounds like a great deal of “work,” a word students are sometimes allergic to. Consider this an invitation to help me plan the upcoming semester, one I hope will be the best semester in my 31 years of teaching Advanced Writing at the university.